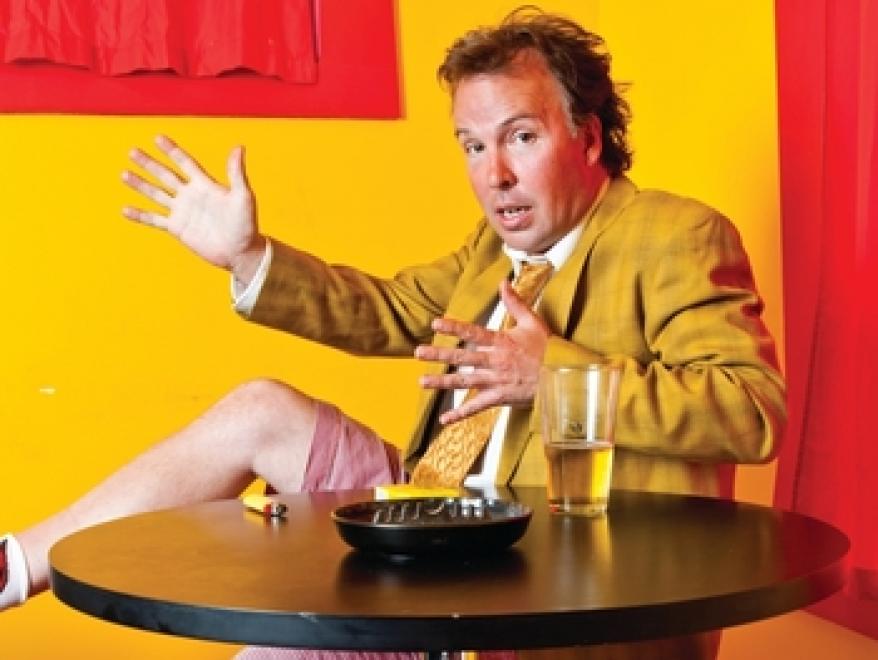 "Let me tell you something, friends. Doug Stanhope is one funny sumbitch. He's also one of the most twisted individuals I've ever met, but that's part of his charm. He's one of those comics that doesn't make shit up. He lives a mad, mad life and what he remembers he reports back to us. He's been known to bare his soul, and other things, right there on thestage. If you're easily offended, stay home this week. Watch Matlock or something. But if you like your comedy rough, raw, and rowdy, there's no one better than Doug Stanhope. Have I made myself clear?" - Austin Chronicle "He blazed with the honesty, outrage and lucidity that made his name... Much of what's wrong with the world melts away in Stanhope's flame... comedy with brains and guts and a heart", "the charm, don't-give-a-damn swagger and aggressive intelligence that make for important, exciting comedy." - The Guardian, London "There's a kind of Olympic torch of extreme American comedy, which passed from Lenny Bruce, through Richard Pryor and Sam Kinison... to the late Bill Hicks. Stanhope is the latest, and equally brilliant, bearer." - Independent on Sunday "Stanhope's stage show is a momentous thing to behold. Don't expect typical Bush-bashing or paper-thin material - he takes no prisoners in his ruthless baiting of everything that gets under his skin." Glasgow Evening Times "On his way to self-immolation, Stanhope works through an hour of brilliant material which slaughters just about every sacred cow on the farm." - The Scotsman, Edinburgh "Stanhope breaks down the walls of decency. He uses profanity, but nothing he says is meant to shock. Everything he says is designed to make the audience laugh. Stanhope has worked his way to become one of the best comics around." - The Reno Gazette Journal "Ask anyone whose opinion matters, and they'll tell you Doug Stanhope is one of the top ten stand-ups in the world today. Stanhope's confrontational stance comes from the rough, blistered underbelly of America's trailer parks; he's a feral, aggressive man full fuelled by primal urges to drink, fight and screw ­ and the corrosive material has all the venomous aggression you might expect from that background. But what underlines it, and makes it so untouchably good, is the passion and conviction with which he holds his intelligent beliefs, informed by sensibilities that might seem alien to such a no-nonsense, pig-headed persona." - Chortle UK "Watching Stanhope is half entertainment and half survival. It's that perfect mix of substance and chaos that made punk rock fun in the seventies. There's a very real chance a fight will break out or all hell will break loose and the tension is intoxicating." - ClevelandYucks.com "If there's such a thing as being too honest in comedy, Doug Stanhope may come close. Known for brutal honesty, railing against the "system" and caring very little about what his audience thinks, Stanhope has elevated himself to become one of today's most talked-about artists." - TimeOut, Chicago "Doug Stanhope is a gritty comic that mixes atrociously profane gutter humor with acerbic social commentary that would likely get him killed if he weren't so damned funny. If there any one thing about Stanhope that's telling of his talent, it's that his material bears repeated listening. Unlike so many of his contemporaries and influences, you can listen to the same Stanhope CD over and over and always get something new out of it." - Deadtide.com "Stanhope possesses a range of stunningly effective stand-up skills and a talent for subtle verbal phrasing. More importantly, he speaks out not only about sex and drugs and so-called perversions, but also about social and political hypocrisy. And his rants command attention because he clearly means every single thing he says." - TimeOut, London "Some of the sharpest and most biting cultural commentary you'll see in a comedy club." - St Louis Post-Dispatch "See him very soon, because he describes his own intake of drink and drugs as staggering. "Jesus died for your sins," he reminds us. "I'm doing it for your mere entertainment." Well, he isn't Jesus. But at his peak only a literal miracle could produce better, more challenging comedy." - EdinburghGuide.com "Sharp, off color, and howlingly funny" - The San Francisco Chronicle