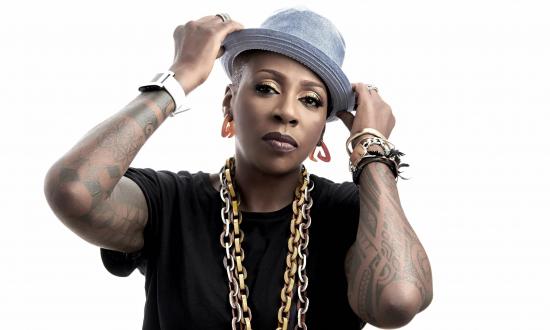 Gina broke onto the American comedy scene with her appearances on Last Comic Standing (NBC), where she made it to the final 10. She is also know in the US for her regular, hilarious appearances on The Tonight Show with Jay Leno (NBC), as Madame Yashere, The Surly Psychic. What you don’t know is that Gina Yashere’s sellout live appearances are legendary. Her bombastic delivery, infectious personality and cheeky observations have wowed audiences not just in the UK and the US but also in Japan, Dubai, Hong Kong, Singapore, Australia, Canada, South Africa, and all over Europe. Gina hails from London via Nigerian parents and shoots from the hip. Her unique take on being both a cultural insider and outsider never fails to raise the roof. Following an early career as a elevator engineer, Yashere made her comedy debut at the Edinburgh Festival in 1996. The show sold out almost immediately and overnight both audiences and critics were smitten. Since those early heady days, Gina has continued to take the comedy world by storm and is now one of the most highly sought after comics in the UK and the US, selling out theatres all over the UK, releasing her critically acclaimed DVD ‘Skinny B*tch’, and making numerous appearances on TV, radio, and the big screen. Her TV appearances have included her own 1 hour Comedy Special 'Skinny B*tch '(SHOWTIME), The Jay Leno Show (NBC), The Tonight Show with Conan O’Brien (NBC), Last Comic Standing (NBC), Chelsea Lately (E!), Live at Gotham (Comedy Central), Def Comedy Jam (HBO), Comics Unleashed (ABC), The Mobo Awards (UK Host), Mock The week (BBC UK), The Lenny Henry Show (BBC UK), and The Celebrity Fame Academy (BBC UK). Radio shows have ranged from her own BBC Radio London Show to critically acclaimed radio Sketch show-The Powder Room (BBC Radio UK). Feature films have included Kiss Kiss Bang Bang and Mr. in Between. She has also appeared on the West-End stage in The Vagina Monologues. She has also performed numerous times at the prestigious Just For Laughs Comedy Festival in Montreal and Toronto, and at HBO and TBS’s The Comedy Festival in Las Vegas. It’s a wonder she found the time to pick up her 3rd award in a row for “Best Female” at the recent Black Entertainment & Comedy Awards (UK). Gina recently played a principal character in the TV series in the UK entitled 'Married Single Other' which is currently being aired on ITV in the UK, and in Australia. Gina currently resides in Los Angeles and tours non-stop around the world.