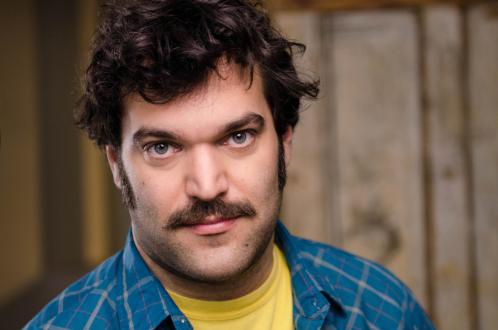 Mike Lebovitz began his comedy career at the age of six with clowning classes at the local JCC. He's been delighting and confounding audiences with his intoxicating brand of wild-eyed humor ever since. Equal parts lovable and absurd, Mike's act careens from topic to topic with the force of a runaway freight train with a loose wheel and some questionable couplings. Audiences have described the experience as "spontaneous," "joyful" and "slightly terrifying." Mike cut his teeth in Chicago (not as painful as it sounds), where he was a member of the popular collective Comedians You Should Know and a regular contributor to WBEZ's weekly live literary magazine, The Paper Machete. He also co-curatored (with his buddy Junior) Señorita Weiner's Top Secret Humor Experiment and Ice Cream Social Club, Chicago's longest-running clandestine, nomadic comedy showcase and the original members-only ice cream social. A burgeoning international star now based in New York, Mike has offended nostrils in Montreal as a "New Face" of the 2013 Just For Laughs, and in Switzerland where he won the international competition at the 2013 The Montreux Comedy Fest. Mike returned to Montreux in 2014 as the "Godfather" of the competition, that year he also recorded his debut album, Two Slob Household for Stand-Up Records. It is still possible that it may be released one day. In 2015 he appeared on Season 9 of NBC's Last Comic Standing.