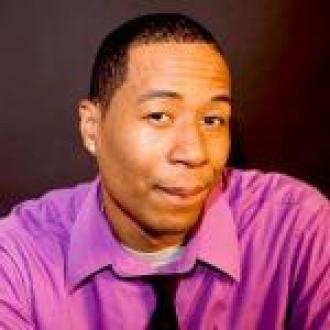 Known to colleagues and audiences as "Sim", Simeon Goodson is a native son of Brooklyn who's been hitting the city's comedy clubs, bars, and taverns since 2004 in pursuit of a dream. He has performed at a variety of world famous venues including Caroline's on Broadway and Stand Up NY. Simeon Goodson has an extensive internet following with well over sixteen twitter followers. He can be seen as an irreverent radio host in the popular web series "D.Lemon in the Morning" (www.DLemonInTheMorning.com).  Sim defines his comedy style as a verbal manifestation of his inner conflict. Constantly battling within are opposing forces, on one hand urging him to be an upstanding citizen and on the other an intimate desire to punch you in the face. His clever writing and unconventional delivery allow him to do both. Check out Sim online at www.InSimWeTrust.com.