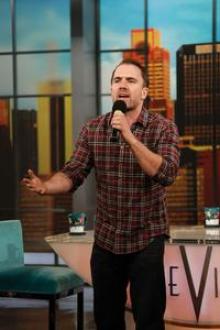 Thomas J. Kelly was born to be on television. During the summers most kids go to day camp, space camp, or a sports camp as a teen Thomas J. Kelly went to TV Camp. Since his freshman year of college, Tom has had an On and Off camera career ranging from cable access television to network shows. Ever since in elementary school, Tom was always a bit of an outsider. In high school here learned there are two ways to keep from getting your butt kicked 1) making people laugh and 2) screaming like a girl. At a certain point Tom realized making people laugh was much more dignified. In a recent appearance on ABC’s “The View” he revealed to America that his love of Star Trek helped him pass the time as he lost his virginity at a very late age. Kelly has managed to turn awkward and charming into a career. In High School he dreamed of being the next Letterman. Hosting is what he does best. As the warm up comedian for ABC’s “The View”, Tom gets the crowd going before the show and entertains them during the commercials. Tom moderates podcast available at ThisShowAgain.com featuring a cast of friends and experts who discuss pop-culture and ways for you to live your life. A review in The New York Times called “This Show Again” . . . funny, and listening to the show is like sitting at a neighborhood bar with friends.” Kelly is at a wonderful crossroads of his career. He can be seen warming up crowds for TV shows with celebrities during the day while doing his own thing at night. As the warm up comedian for Good Morning America’s Summer Concert Series, Tom is no stranger to large crowds. While opening for Miley Cyrus and the Jonas Brothers Tom, has performed for crowds of over 15,000 and 20,000 people respectively. His favorite concert was opening for a U2 concert at Fordham University with a crowd of 9,000 college students in the snow and mud. A versatile emcee, Tom has also opened for Usher, Kelly Clarkson, Fantasia, and Counting Crows among others. When time permits, Tom has also freelanced for “Live with Regis and Kelly”, “Fashionably Late with Stacy London” and “Head Games.” In addition to his work in a variety of clubs in the New York area, Tom is a pioneer in using the Internet to spread his comedic message. Tom turned his disdain for large weddings into the popular IHateWeddings.com which gets over 2,000 visitors a month. Articles from Kelly’s wedding humor website IHateWeddings.com have been cited in “In Touch” magazine and on numerous radio programs. Kelly created and starred in Internet based video series “The Little Merman.” LittleMerman.com is a docu-comedy about Tom’s quest to be the first male mermaid at Weeki Wachee Springs. The series follows Kelly as he quits comedy and moves from New York City to Weeki Wachee Springs, Florida to become and underwater performer and the first “merman” at the historic tourist attraction. During that time, Kelly really performed synchronized swimming shows in the park’s underwater theater. Tom has an extensive off camera and off microphone resume working in radio and television. He writes a daily comedic “prep sheet” for the United Stations Radio Networks which is syndicated to over 100 radio shows nationwide including “Elvis Duran and the Morning Show.” His TV resume includes experience at “The Rosie O’Donnell Show” where he saw several of his ideas make it to air, “Dateline: NBC”, “NBC Nightly News,” and “Elimidate” Tom’s segment “A Moment With Tom” is a regular feature on ABC’s The View. Tom has appeared in several episodes of Prime Time Live’s “What Would You Do?” on ABC. And perhaps most impressive is that he managed to write this entire bio about himself in the third person without saying “I” once.