Join us for an unforgettable evening of laughing and drinking, featuring some of the funniest and most talented comics from all over the Northeast at one of New Haven’s newest restaurant featuring award winning BBQ of Jamie “The Bear” McDonald and in-house craft beers brewed by the owners of Black Hog Brewing. Plenty of free parking on-site. Fun, casual atmosphere. Bring a friend, grab a beer and have a laugh…. 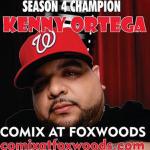